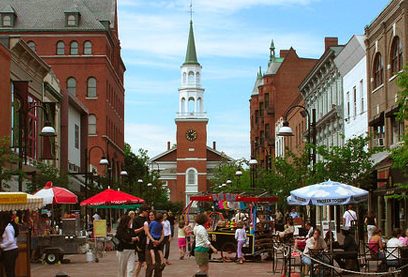 Environmental advocacy organizations aren’t typically known for standing up for development projects, so it surprised some when the Vermont Natural Resources Council (VNRC) spoke favorably about the redevelopment concept for the Burlington Town Center.

VNRC has a long history of promoting community planning, downtown revitalization, and the protection of the state’s working lands and natural areas. This has included recognizing the value of dozens of smart growth projects over the years and the environmental benefits they provide.

In the case of the Burlington Town Center, the location is among the ripest for redevelopment in the state. Knocking down blocks of historic urban form to build a suburban style mall in the 1960s destroyed critical street connectivity and created a physical barrier – a wall, and not a beautiful one.

The Town Center is adjacent to the busiest transit center in the state, in one of Vermont’s most walkable communities. The conceptual development – the design of which is still preliminary – would reconnect the street grid, improve pedestrian circulation, and turn the mall outward, back to the street, enhancing the urban fabric of the downtown core.

And, putting more housing, jobs, and services closer together has other benefits that enhance both the vitality of the downtown and help the environment. It means people will have transportation choices other than cars, which can reduce energy use and carbon emissions. We have big goals as a state for reducing greenhouse gas emissions, and we have a lot of people who want to be less dependent on their cars. This project can help achieve those goals.

There’s also another potential opportunity to conserve energy: If the heat from the McNeil generating plant can keep downtown buildings warm instead of being a waste product, we’re getting more value – environmentally and financially – out of every ton of wood chips that’s burned in that plant.

Redeveloping land with increased densities in already developed areas also takes pressure off of undeveloped areas, like farmland and forests. For nearly 30 years, land use policy in Vermont has been to create compact centers surrounded by open countryside.

At VNRC we’ve taken this policy seriously. We recently intervened in an Act 250 proceeding to oppose a project at a highway interchange in central Vermont that would have had almost exactly the same number of square feet of development as the Burlington Town Center project, but spread across over thirty times as much land – including almost 130 acres of some of the state’s best agricultural soils.

Finally, the proposal will improve stormwater management in the area, reducing the amount of pollution that dumps directly into Lake Champlain. The City has done an admirable job grappling with water quality in recent years, and this is but one more example.

In commenting on the Burlington Town Center project, however, we did not offer unqualified praise. We acknowledged that many people, including some of our members, have legitimate concerns about some aspects of the proposed redevelopment. Most importantly, the amount of aboveground parking and the massing of the top stories need further consideration.

We expressed a hope that those issues would be resolved in the design review process as the project moves forward. Based on recent changes to the conceptual design that reduced both the amount of parking as well as its visual impact from street level – and that showed how design features would soften the physical impact of the height and improve the experience for pedestrians ­– it appears likely that this can happen. The project does not call for massive, dark red cubes hovering over nearby streets and buildings, despite what opponents might want you to believe.

There has been much information – and frankly a tremendous amount of misinformation – circulated about this project, and the ballot items that are associated with it. Ultimately, Burlington voters will make a decision. Regardless of the outcome, I just hope the decision is informed by facts.