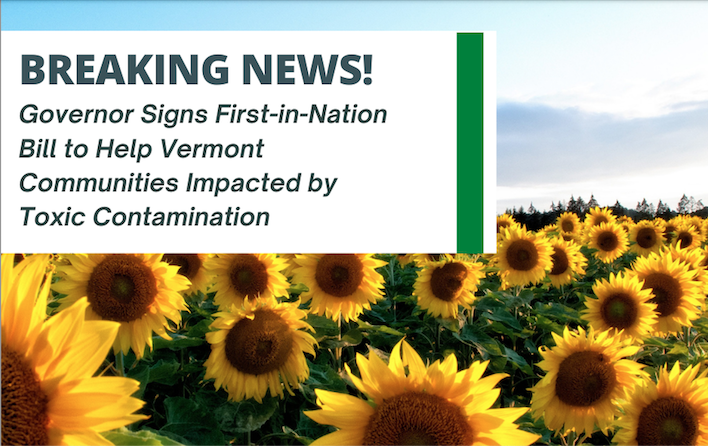 Currently, Vermonters can be on the hook for costly medical bills to monitor diseases linked to toxic exposure. In 2021, the Legislature enacted a bill to restrict toxic PFAS chemicals (perfluoroalkyl and polyfluoroalkyl substances) from a range of products, a positive step for reducing toxic exposure. However, PFAS and numerous other chemicals that can harm human health persist in our environment and are still in use by corporations.

“Big corporations typically have large legal teams that can tie up lawsuits in court for many years, and make it incredibly difficult for victims of toxic contamination to be compensated for the costs they’ve had to bear,” said Lauren Hierl, executive director of Vermont Conservation Voters.

Jon Groveman, Policy and Water Program Director for the Vermont Natural Resources Council added, “Signing this bill is an important step towards holding polluters responsible and signals support for families and communities who should no longer bear the financial burden as victims of toxic pollution.”

The Governor vetoed two previous versions of bills that allowed for remedy of medical monitoring. Several legislators have been crucial to moving this issue forward over several years.

Senator Dick Sears, Chair of the Senate Judiciary Committee, the lead sponsor of S.113, stated, “No one should have to wait five years to get medical monitoring from a polluter that contaminated their drinking water,” referring to the release of PFAS in Bennington, Vermont where the victims of toxic pollution fought for five years with a corporate polluter who argued there was no legal right to seek medical monitoring damages in court.  Sears added, “S.113 ensures that there will be no question that people harmed by toxic pollution will have the right to seek medical monitoring costs.”

Senator Brian Campion, also a sponsor of S.113 and a longtime champion of addressing toxic pollution added, “We have worked hard to get this important bill over the finish line.  I want to thank my constituents for their support over the past several years. This bill will make a difference in the lives of many people.”

Rep. Maxine Grad, the Chair of the House Judiciary Committee that approved S.113 and the other bills addressing medical monitoring stated, “S.113 is a critical public health measure. It will aid in the early detection and prevention of illnesses caused by exposure to toxic chemicals.”

Rep. Martin LaLonde, also a member of the House Judiciary Committee who worked to shape S.113 added, “There is an important public health interest in fostering access to medical testing for individuals whose wrongful exposure to toxic chemicals creates an enhanced risk of disease, particularly in light of the value of early diagnosis and treatment. The availability of medical monitoring may prevent or decrease the severity of future illness and reduce the costs for everyone involved. The early detection of latent diseases may improve the prospects for cure, treatment, prolongation of life, and minimization of pain and disability for Vermonters.”

S.113 will ensure the following: