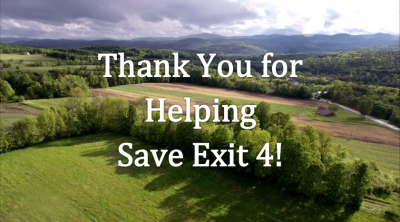 Update, 8/17: Now that the land at Exit 4 has been conserved, we’re ready to take the next step! Preservation Trust of Vermont, who now owns the 22 acres closest to the highway, would like to transfer the land to a person or group who will uphold the values of open space and farming. We’re seeking submissions via this Request for Concepts. Send along your ideas by October 10, 2017 to be considered as a possible future owner of this beautiful land!

View the Request for Concepts here.

You Did It! We Did It! Together we have raised $1 million and exit 4 will be saved!

Thanks to hundreds of generous Vermonters, we have reached the one million dollar goal to purchase 22 acres at Exit 4 in Randolph! When this parcel is added to the 150 acres that the Castanea Foundation has purchased, a total of 172 acres of land will be protected from development and put into agricultural use. What an astonishing effort!

It was just two years ago that the developer and owner of the property proposed building 1,200,000 square feet of mixed use development. Now the property will be protected forever. The outstanding scenic views will be protected, prime agricultural soils will be used for agricultural purposes, and the lack of sprawling commercial development on the site will help build a stronger downtown Randolph.

This didn’t happen by accident.  From the beginning it has been a team effort! When the application for the massive development was submitted, the Vermont Natural Resources Council – in partnership with the Conservation Law Foundation – led the opposition in the Act 250 permitting process. Exit 4 Open Space rallied local support and also provided a strong voice at the hearings.   Throughout the process, Preservation Trust of Vermont supported these efforts by funding expert witnesses and helping to raise public awareness around the state about the importance of this fight.

Then there were several months when CLF, VNRC, and the Preservation Trust participated in a mediation process with the developer.  And then more negotiations.

A major breakthrough happened when the Castanea Foundation reached a deal to buy 150 of the 172 acres along Route 66 in Randolph.

And then after more negotiating, the owner Sam Sammis agreed to give the Preservation Trust, CLF, and VNRC two months to purchase the remaining 22 acres.

Exit 4 Open Space did the grassroots fundraising, and we – under the tireless leadership of Preservation Trust’s Executive Director Paul Bruhn – then looked for major gifts to reach the $1 million goal.

It was a daunting task. But you did it! We did it! We have saved Exit 4! We are so grateful to our grassroots contributors and our major donors.  Each of the 476 donations was important and critical to our success!

Our sincere thanks, and once again – congratulations!