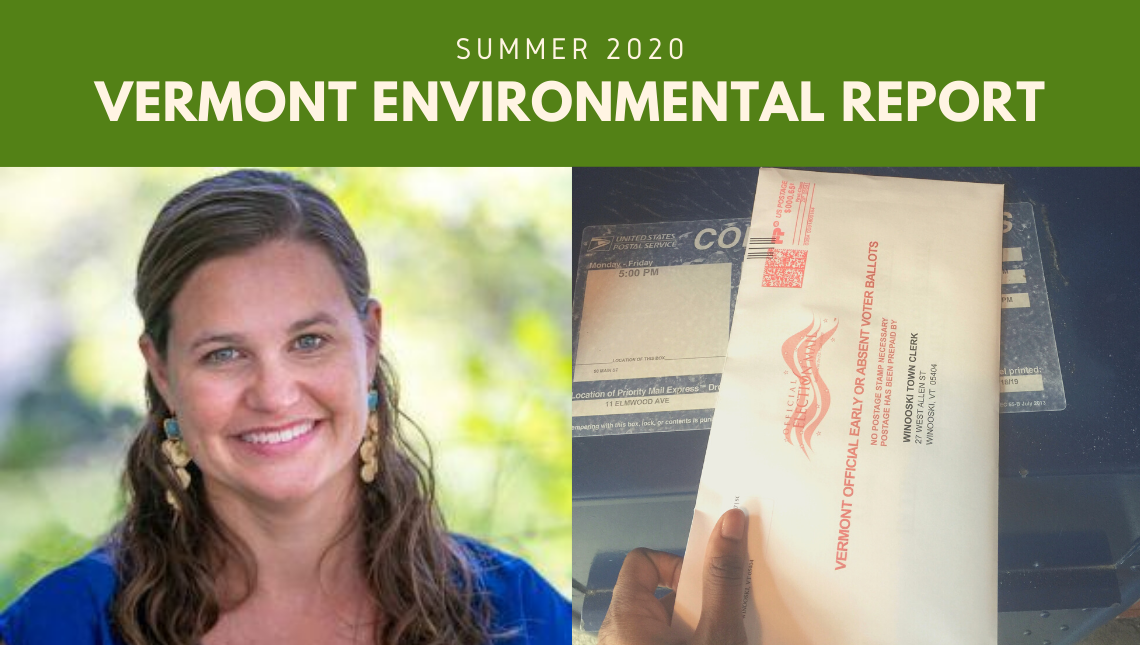 In April, many people watched with concern as voters in Wisconsin lined up for hours at limited polling places — at a time when most of the country was still on lockdown due to the COVID-19 crisis — after the conservative Wisconsin Supreme Court refused to postpone the state’s elections.

“People were literally forced to choose between their right to vote and putting their health at risk,” says Lauren Hierl, Director of Vermont Conservation Voters (VCV). After the elections, the Wisconsin Department of Health reported dozens of cases of COVID-19 linked to people who had voted in person that day.

In Vermont, as in other states, we’ve had to make important decisions about how to ensure safe voting in the November 2020 elections. Vermont Secretary of State Jim Condos, who oversees our state elections, was authorized this spring by the Vermont Legislature to develop new procedures to protect the health and safety of voters, election workers, and candidates during the pandemic.

While initially the Legislature sought agreement on the Secretary’s election plans from Governor Phil Scott, Scott failed to endorse a vote-by-mail program and instead called for a wait-and-see approach. Knowing the state must act swiftly to put in place the systems and contracts needed for a successful and secure voting program in 2020, in June the Vermont Legislature passed a bill giving Condos the unilateral authority to implement vote-by-mail during the pandemic.

Secretary Condos’s plan includes sending each registered voter their ballot in the mail for the November elections, which will allow as many Vermonters as possible to cast their votes from the safety of their own home. Condos also mailed active registered voters a postcard for the August Primary elections, letting them know they can request an absentee ballot and vote at home.

Vermont is building on strong progress in recent years to make voting more accessible. Approximately 30% of Vermonters already cast their ballots using no-excuse absentee voting, where anyone can request and return their ballot through the mail. We have automatic voter registration through the Department of Motor Vehicles (DMV), which increases registration rates and helps us maintain an accurate voter database. Vermont also has same-day voter registration, meaning you can show up at the polls, register to vote, and cast your ballot — all on Election Day.

“This year, given the uncertainties and health risks around COVID-19, we’re excited that the state is moving forward with implementing a universal vote-by-mail system for the November elections,” says Hierl. There are already five states with these systems in place: Utah, Oregon, Washington, Colorado, and Hawaii. A number of other states, including Massachusetts and Rhode Island, are starting to commit to expanded vote-by-mail programs this year. “Vermont election experts have been able to learn from these states’ experience to structure a program that will be safe and secure,” Hierl adds.

There are multiple benefits to vote-by-mail in addition to avoiding risks of exposure to COVID-19. Notably, vote-by-mail states have higher than average voter turnout. And by having their ballot at home, people have the time and opportunity to do research, making them more likely to vote on every item on their ballot. This increases participation in important races up and down the ballot that are not as well publicized. Sending all Vermonters their ballot, while also maintaining in-person voting options, will ensure that as many people are able to vote as possible, including voters with disabilities, voters who need interpretation services for their ballots, and even voters experiencing homelessness. In Oregon, for instance, a voter can provide any address where they can pick up their ballot: a shelter, a church, or even the county clerk’s office.

In April, VCV learned this and more through a webinar it co-hosted with VNRC featuring Lindsey Scholten, Political Director at Oregon League of Conservation Voters. The program informed Vermonters about the type of system our state could expect to adopt, and lessons learned from Oregon’s twenty years of experience with its vote-by-mail program, for which it is nationally renowned. Find the recording of the webinar at here.

Despite extensive evidence to the contrary, the Trump Administration and its allies have been calling into question the security of vote-by-mail. But as the New York Times Editorial Board noted in March, states that use vote-by-mail have encountered essentially zero fraud. Oregon has sent out more than 100 million mail-in ballots since 2000, and has documented
only about a dozen cases of proven fraud.

Vermont has already been recognized as having one of the most secure election systems in the country. We can continue that tradition by successfully implementing a vote-by-mail option for the November 2020 elections, and beyond.

“Frankly, I love going to the polls on Election Day, seeing local candidates and showing my children how democracy works,” says Hierl. “But during this pandemic, we are much better off committing to — and preparing for — safer and more accessible ways for people to vote.”