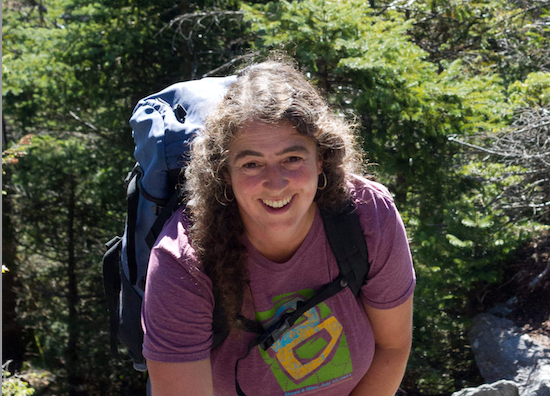 VNRC is thrilled to present the 2022 Arthur Gibb Award for Individual Leadership to Zoe Richards, Chair of the Burlington Conservation Board and Director of Burlington Wildways, in recognition of her dedication to preserving and expanding access to Burlington’s natural resources and wild spaces.

VNRC and Jens Hilke of the Vermont Department of Fish & Wildlife will co-present the award to Zoe at VNRC’s Annual Meeting at Hula, in Burlington, on September 22nd.

Zoe has been a member of the Burlington Conservation Board since 2013, where she has had a tremendous influence in improving the environmental sensitivity of new development, improving shoreline protection along Lake Champlain, and developing community-informed nature-based solutions to address climate change.

In a major victory for land preservation in Burlington, Zoe played a key advisory and fundraising role that led to the protection of Rock Point—over 160 acres of land of the Episcopal Diocese of Vermont and the City of Burlington’s Arms Forest in 2018.

Under her leadership, the city implemented a “low mow” standard along the lakeshore that will help to improve the ecological integrity of the shoreline as properties are redeveloped.

As founder of the Burlington Wildways Coalition—a partnership between Burlington Parks, Recreation & Waterfront Department, the Burlington Conservation Board and City Council, the Winooski Valley Parks District, Rock Point, and the Intervale Center—Zoe has led the effort since 2017 to increase connectivity among the city’s natural areas and to increase the effectiveness of ongoing conservation efforts. The endeavor also works to increase public awareness of these areas and expand the ranks of people who actively care for wild lands, as well as to improve Burlington’s flood control, moderate urban temperatures, and sequester carbon.

Zoe began her career as a wildlife biologist, studying a nesting colony of Great Blue Herons on Lake Champlain, which inspired her to protect the wetlands they relied on to forage and feed. We are honored to present her with the 2022 Arthur Gibb Award for her commitment to protecting our wildlands for the benefit of both humans and our non-human neighbors. Our sincere thanks to Scott Gustin, Principal Planner & Zoning Division Manager for the City of Burlington, for nominating Zoe for the award.