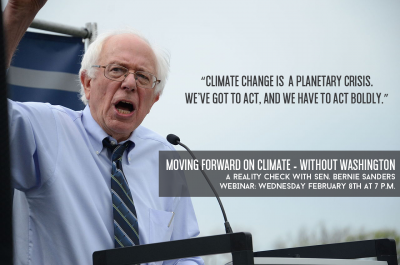 It’s clear that a new federal administration – one that disdains science and intends to roll back our nation’s commitment to climate action – puts the onus on state’s and municipalities to act. That is why VNRC and our partners organized a recent webinar to give Vermonters an opportunity to hear about the best ways to take local climate action from Senator Bernie Sanders, Addison County Senator Chris Bray and some of the state’s leading climate action organizations. Nearly 1,000 Vermonters tuned in throughout the webinar.

During the webinar Senator Sanders laid out many reasons why local and state level leadership must be the hotbed of innovation and action on climate going forward. He also celebrated the leadership of Vermont’s town energy committees and encouraged others to join – or start one (with VECAN’s help!). Senator Chris Bray also underscored the value of local leadership, getting involved with your regional planning commission and the importance of continuing progress toward our state’s goal of meeting 90 percent of the state’s energy needs with renewable energy by 2050, and the opportunity to support his bill – S.51 – which would do just that. VNRC’s Johanna Miller, VPIRG’s Paul Burns and Rights & Democracy’s James Haslam also outlined the need for more active and ongoing engagement, including urging people to let their Representatives and Senators know of their support for S.51 – and keeping Vermont on the job-creating and climate-friendly trajectory of our clean energy transition.

If you missed it – or want a refresher – you can watch the webinar here: