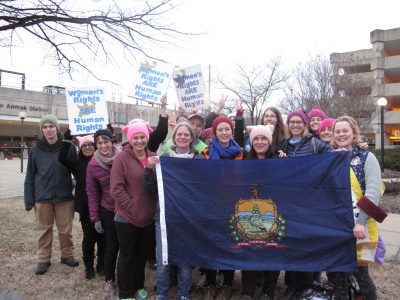 Over the weekend, VNRC staff and a busload of our members, activists and friends  joined nearly a half a million people at the Women’s March on Washington. It was a historic moment in D.C., and we are thrilled to know that 15 to 20 thousand Vermonters marched in solidarity in Montpelier. This weekend demonstrated that we have the people power to defend against social and environmental injustices that may come out of the Trump Administration in the days and years ahead. For our part, VNRC will build upon this momentum to defend our shared values and chart a brighter future for people and the planet here in Vermont.

“The overflowing turnout to the Women’s March on Washington, and the unprecedented attendance to country-wide sister marches, proved to me that there are millions of others out there like me who won’t succumb to fear, depressed apathy, or hate. We’re ‘fired up and ready to go,’ as we chanted in the crowd. We’re also organized and recognize the intersectionality of threats to women, people of color, LGBTQ people, our climate and environment, and income inequality. I’m proud that VNRC is active in this effort.“” – Hannah Huber, Energy and Climate Community Organizer

“My favorite part of the amazing march in Montpelier occurred when I was leaving the event. My 10-year old daughter turned to me and said, ‘Mom, I’m so glad we came. That was amazing and I’m feeling so inspired.’ ” – Steff Mueller, Director of Development

“It was inspiring to see democracy in action.  I felt overwhelmed with patriotism and hope for our country.” – Nancy Davila Groveman, Finance and Operations Manager.

The march in Montpelier wasn’t just inspirational; it was also agitating in the best possible way. People spoke up for women’s rights, but also for inclusion, for the environment, for migrants, for Native Americans, for women of color, and more. These are voices I believe we all needed to hear. I’m inspired to keep listening, even more closely than before, and I certainly hope elected leaders will do the same.” – Kate McCarthy, Sustainable Communities Program Director

“I had never been to a march like this before and am so glad VNRC put in the work to organize a bus and that I was able to participate. The march left me feeling joyful and empowered, but most importantly I’m more motivated than ever to carry the sentiment of this weekend with me and work hard for what I believe will make our world better. I think that’s the most powerful part of organizing together.” – Meredith Naughton, Membership and Database Coordinator

Leading up to the march, Executive Director Brian Shupe spoke with Local 44 about why VNRC was going to Washington. Watch the story here.