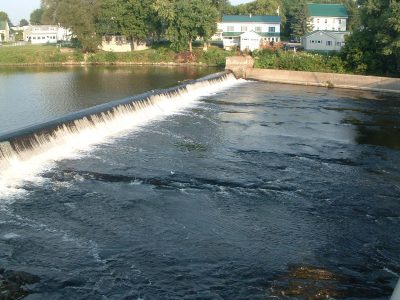 These comments were to the United States of America Federal Energy Regulatory Commissionon July 18th, 2016.

The Vermont Natural Resources Council, Lake Champlain International, Vermont Chapter of The Nature Conservancy and Vermont Council of Trout Unlimited herein file comments on the Application for a Preliminary Permit (Application) for the Lower Swanton Dam Hydroelectric Project (Project), as filed for in the above proceeding and noticed by the Commission on May 17, 2016.

Lake Champlain is the largest waterbody in the state of Vermont and the Missisquoi is one of its largest tributaries. The waters of the Lake Champlain watershed are a highly diverse ecosystem containing species of fish and mussels found nowhere else in New England. The lake and its tributaries are the focus of ongoing ecosystem restoration programs in both the U.S. and Canada aimed at abating pollution, restoring connectivity and improving aquatic habitat. The lake and its resources are highly valued by the region’s residents. They are also important to the region’s economy, supporting a tourism and water sports economy that generates several hundred million dollars each year.

Our organizations and state and federal resource agencies have been advocating since the 1990s for removal of Swanton Dam to restore connectivity between the lake and upstream aquatic habitat and increase the resilience of the river to the impacts of significant floods (with the related reduction of flood risk to structures in Swanton village). For example, at the state level the 2013 basin plan for the Missisquoi developed by the Vermont Agency of Natural Resources (1) identifies Swanton Dam as a high priority for removal.

Development of a hydroelectric project at the site would delay further consideration of dam removal for several decades. For that reason, our organizations are opposed to issuance of a preliminary permit by the Commission for the Lower Swanton Dam Hydroelectric Project.

The Project as proposed is similar to an earlier proposal by the Village of Swanton, FERC Project No. 14085. That project, in-turn, appears to have been modelled after a project licensed by FERC in 1990 (Project No. 8459). The issuance of a FERC license and Section 401 Water Quality Certification for P-8459 notwithstanding, the current proposal will require a full environmental review. Since 1990, there have been changes in Vermont Water Quality standards, advances in our understanding of the biology of fish and wildlife species potentially affected by the Project, fluvial geomorphology and the effects of dams on riverine species and habitat and the limitations of developing safe and effective fish passage at dams. Further, 25 years have passed to collect data on the river and species that depend on it during their life cycles. And finally, the effects of climate change on the Missisquoi River’s hydrology and the effect the dam has on the necessity of adapting to that change must be considered.

If this project moves forward, many new studies will be needed to provide the facts necessary for state and federal regulators to make well-informed decisions. The studies proposed for P-14085 by the Vermont Agency of Natural Resources and U.S. Fish and Wildlife Service (filings dated August 15, 2013) and Lake Champlain International (August 14, 2013) represent the broad array of studies needed. Additional or modified studies are likely to be needed to evaluate the addition of flashboards, which was not proposed in P-14085.

Historic records indicate that major fish runs including sea run Atlantic salmon, lake sturgeon, American eel, walleye and other species occurred on the Missisquoi River prior to construction of the first dam in Swanton in 1797. Before that first dam was constructed, fish were able to move upstream an additional 71⁄2 miles to Highgate Falls, a natural falls having a vertical drop of approximately 30 feet that is believed to have been historically impassable to fish. A dam has been built upon this falls and is currently operated as a hydroelectric generating facility by the Village of Swanton. For over 200 years, the Swanton Dam and earlier dams at this site have blocked fish passage to upriver spawning habitat, and they are believed to have been instrumental in the decline of fisheries of the Missisquoi River and Lake Champlain. Lake sturgeon, which was once a valuable commercial fishery, is now listed by the State as endangered, as is the stonecat, another species that inhabits an area immediately downstream from the dam.

Today, the Missisquoi remains as an important spawning tributary for many species of fish, including walleye and lake sturgeon. However, spawning and incubation habitat has been relegated to a small patch of cobble substrate immediately downstream of the Swanton Dam. These two species spawn in only a small number of Lake Champlain tributaries, so every mile of spawning habitat regained is critical. The Vermont Fish and Wildlife Department has stocked walleye fry and fingerlings for decades. The limitations of natural reproduction have been demonstrated by the large proportion of the walleye fishery that is derived from stocked fish as determined via mark and recapture methods. Sampling by state biologists has demonstrated that a small number of lake sturgeon still spawn below the Swanton Dam. Spawning and other aquatic habitat remains abundant upstream of the dam but is inaccessible to these species due to the existing dam which blocks fish passage.(2)

Restoration of lake sturgeon and walleye fisheries would greatly enhance the fisheries resources of the region. Restoration of Atlantic salmon runs would be a boon to fishery recovery efforts and provide tremendous social and economic benefits to the anglers, the community and people of Vermont. The Vermont Fish and Wildlife Department stocked 21,000 salmon upstream of the Swanton Dam in February 2011 in an initial attempt to return a salmon run to the Missisquoi River.

The Application notes that providing fish passage at the dam would be an ecological benefit of the Project. The Application explicitly calls out lake sturgeon and walleye as species for which passage would be provided. However, other species are known to inhabit the Missisquoi, including longnose gar, freshwater drum, redhorse, white sucker, stonecat and American eel. Passage for all life stages of all of these species, both upstream and downstream, is needed for these species to thrive.

Providing safe and effective fish passage past the dam for the full array of species to support the full diversity of the aquatic ecosystem above and below the Swanton Dam is impossible using existing technology. No state-of-the-art fish passage facility can fully restore connectivity to this rich and diverse ecosystem that includes twelve species of freshwater mussels (six are state endangered and one is state threatened) that rely on host fish to disperse their young larval stages. Our organizations emphatically do not believe that fish passage is a viable mitigation measure at this dam. The only practical and cost effective way to reconnect the upstream and downstream habitat is to remove the dam.

The Application states that the Swanton Dam creates a 170 acre impoundment. Removal of the dam would restore this 170 acres of existing pseudo-lacustrine habitat to riverine habitat necessary for the fish and mussel species noted above.(3)

As previously noted, lake sturgeon and stonecat are state-listed endangered species. Further, both are among Vermont’s Species of Greatest Conservation Need (SGCN). The status for conservation need in Vermont is listed as high priority in Vermont’s 2005 Wildlife Action Plan.(4) In addition, several species of threatened or endangered mussels would also benefit. For example, both pink heelsplitter and fragile papershell (endangered) occur below the dam but not above due to their fish host, the freshwater drum, not being able to migrate from the lake into the upper section of river. Passage is also blocked for the endangered spiny softshell turtle, which is known to inhabit Lake Champlain and the Missisquoi River below the dam.(5)

The Application states that the Project as proposed would shorten the spillway by approximately 55 feet, reducing its capacity by 17 percent. The Village of Swanton is enrolled in FEMA’s National Flood Insurance Program, and the FEMA regulations adopted by Swanton require that new development in flood hazard areas will not result in any increase in the water surface elevation (WSE) during a 1 percent annual chance (100-year) flood event. Conversely, removal of the dam would likely result in a lowering of the upstream WSE during floods. Further, since the dam is not designed for flood control, no current or potential downstream flood control benefits would be lost following dam removal.

The Application notes several recreation and aesthetic benefits that could result from development of the Project. These benefits include expansion of riverside park facilities and improved recreation opportunities on the river. Removal of the dam would provide similar, or even greater, benefits along a free-flowing river. As demonstrated in numerous communities across the country, dam removal would provide the village with opportunities to connect to a free-flowing river with riverside paths and other amenities . There would also be opportunities to recognize Swanton’s industrial past and the important role dams have played in the town’s history through interpretive displays.

The lower Missisquoi is a segment of the Northern Forest Canoe Trail, a 740-mile paddling route between Fort Kent, Maine and Old Forge, New York. Removal of the dam would open up the Missisquoi between Highgate Falls and Lake Champlain to barrier-free boating.

The Swanton Dam has numerous impacts on the resources of the Missisquoi River and Lake Champlain that would be difficult or impossible to mitigate with development of hydroelectric power at this site. Given the rather modest amount of energy that would be produced (3,580 MWh/yr., according to the Application)(6), it should be clear that the best course of action is todeny the preliminary permit and begin a process to restore the Missisquoi to its historic, pre-1779 free-flowing state.

1 Vermont Agency of Natural Resources. 2013. Missisquoi Bay Basin Water Quality Management Plan. http://dec.vermont.gov/sites/dec/files/wsm/mapp/docs/mp_basin06plan.pdf
2 A good explanation of the impact the dam has on lake sturgeon can be found in the Lake Champlain Lake Sturgeon Recovery Plan (2016), published by the Vermont Fish and Wildlife Department. http://www.vtfishandwildlife.com/common/pages/DisplayFile.aspx?itemId=3142802
3 Exhibit G.2 in the Application shows the upstream extent of the impoundment ending at the pedestrian bridge in the village. The water surface area between the dam and the bridge is approximately 12.5 acres. A review of FEMA water surface profile information and a habitat assessment by the USFWS indicates that the impoundment extends at least to the U.S. 7 bridge and perhaps as far as the confluence of Hungerford Brook.
4 Vermont Fish & Wildlife Department. 2005. Vermont’s Wildlife Action Plan. http://www.vtfishandwildlife.com/learn_more/fish_and_wildlife_library/?portalId=73163&pageId=109813&objectId.11292=111420&contextId.11292=109819&parentId.11292=835085
5 Vermont Fish and Wildlife Department. 2009. Vermont Spiny Softshell Turtle Recovery Plan. http://www.vtfishandwildlife.com/common/page/DisplayFile.aspx?itemId=111335
6 For comparison, the Village of Swanton website states that annual production at Highgate Falls is 55,382 MWh.