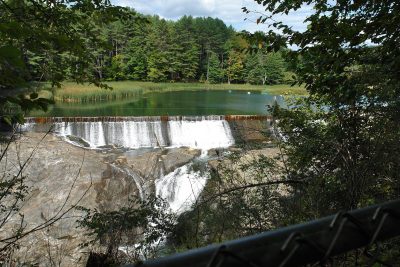 Today, the Vermont House gave its final approval to H.554, a bill addressing dam safety and drinking water protection.  H.554 requires the Department of Environmental Conservation (DEC) to maintain an inventory of all known dams in Vermont and inspect them under DEC jurisdiction on a regular, risk-based schedule.  There are 820 known dams in the state. Of those, 696 are under DEC jurisdiction.

The bill will benefit public safety by requiring inspection, and if needed, maintenance or removal of dams that have been largely ignored. Until recently, DEC has had a longstanding policy to not inspect or maintain good records for hundreds of smaller dams.  “Simply because these dams are smaller and may pose a lower risk to the public does not mean that they pose no risk. Currently, the condition of these dams and the threats they pose to public safety are unknown. H.554 corrects this problem,” said Brian Fitzgerald, Dam Project Coordinator at the Vermont Natural Resources Council (VNRC).

Jared Carpenter from the Vermont Council of Trout Unlimited (TU) added, “This bill has been years in the making. TU, VNRC, and the Vermont Chapter of The Nature Conservancy are extremely pleased that the Legislature has taken action to address the hundreds of unregulated dams in Vermont that pose threats to public safety and the environment.”  Mr. Carpenter added, “This bill would not be possible without the leadership of Representative David Deen, who has been a champion of addressing the impacts of dams on Vermont’s public trust waters over his decades in the Vermont Legislature.”

Importantly, H.554 also includes a requirement to test new wells for certain toxic pollutants.  Jon Groveman, VNRC Policy and Water Program Director, stated, “VNRC has been fighting for well testing for toxics for over a decade.  The urgency to protect drinking water from toxic pollution was made clear by the contamination of wells in Bennington with the toxic substance PFOA. We are pleased that the Legislature has taken this important first step, again, to address the threats toxics pose to drinking water and groundwater.  I say again, because this drinking water protection provision was passed as part of S.103, a toxic regulation bill that was vetoed by the Governor earlier in the Legislative session.”

H.554 now heads to Governor Scott’s desk.  VNRC is hopeful that the Governor will sign this bill into law, improving protections for surface water, for drinking water, and for public health overall.