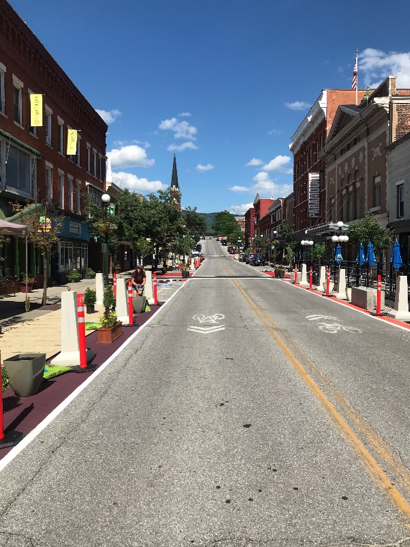 Montpelier – During periods of heavy rainfall when the volume of wastewater exceeds the capacity of the combined sewer system, raw sewage has been discharging into the Otter Creek watershed.  These discharges are called combined sewer overflows (CSOs).  The Agency of Natural Resources (ANR) has documented hundreds of thousands of gallons of CSOs per year from the City of Rutland Wastewater Treatment Facility (WWTF).

Yesterday, the Vermont Natural Resources Council (VNRC) filed an appeal of the Clean Water Act (CWA) National Pollutant Discharge Elimination System (NPDES) permit for the City of Rutland WWTF.  The NPDES permit authorizes the discharge of wastewater from the WWTF to the Otter Creek and its tributaries.  The discharges from the WWTF include stormwater that mixes with sewage during rain events, known as a combined sewer system.  Combined sewer overflows can lead to beach closures, hindering the public’s ability to recreate in waters affected by these discharges, and other water quality issues.  Rain events that trigger CSOs are increasing due to the effects of climate change.

VNRC is appealing the permit because it does not adequately address these CSO discharges.  The permit acknowledges the sewage overflows from the Wastewater Treatment Facility, but indicates the CSOs are regulated through other legal mechanisms outside of the permit.  Unlike the NPDES permit for the City of Rutland WWTF, these other legal mechanisms have no expiration date and are not subject to the public process or the accountability provisions of federal law.

If the combined sewer overflow provisions were included in the NPDES permit, they would be reviewed every five years, and citizens could take legal action if the requirements to address CSOs were not met.  This is not theoretical—we need constant review and management in order to keep Vermont’s waterways clean, and restore those that are currently polluted. The City of Rutland has failed to meet key deadlines to address CSOs set by ANR outside of the NPDES permit, and, despite the actions taken by the City of Rutland for more than a decade, CSOs continue to be discharged from the WWTF at significant levels with no deadline for when the discharges will be eliminated.

Jon Groveman, VNRC Policy and Water Program Director stated, “It is unacceptable to issue a discharge permit that does not include specific requirements for minimizing and ultimately eliminating hundreds of thousands of gallons of raw sewage entering Vermont’s public waters each year via CSOs.  By doing so, ANR is depriving the public of its full right to review the proposal for addressing these discharges, track progress towards eliminating these discharges, and take action to hold the City of Rutland accountable if the CSO conditions are not met.  ANR’s failure to include the specific CSO conditions in the permit violates state and federal law.

Brian Shupe, VNRC Executive Director added, “VNRC recognizes that it will take time and financial resources to completely eliminate CSO discharges.  However, we will never achieve this goal through private agreements between ANR and the City of Rutland that have no end point, and are shielded from public scrutiny and accountability.”