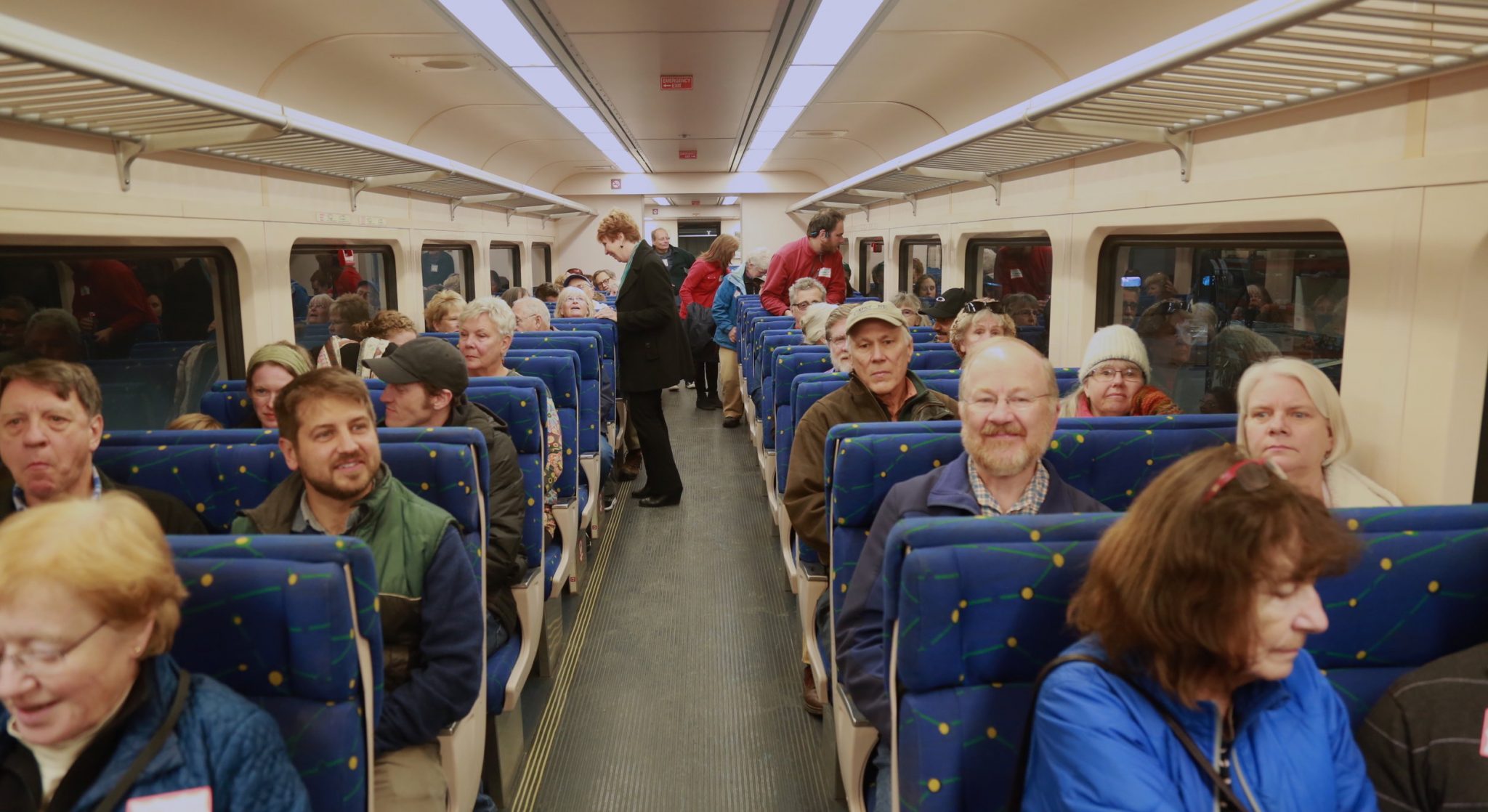 On a brisk afternoon last month, I joined 50 people gathered in an industrial park on a hill above Barre to take a “joy ride.” Awestruck preschoolers, their parents and other more experienced passengers, climbed aboard a self-propelled, 1950s-era railcar. Despite the low speed and short distance—it crawled just a few hundred yards to the end of the rail yard and back—the atmosphere inside the car was buoyant if not joyful. These train fans were focused on the future, as they conjured a glimpse of how rail travel might become part of their daily lives.

Our host, David Blittersdorf, described his ambitious plan to reduce Vermont’s automobile dependency, and its associated greenhouse gas emissions, by reactivating passenger rail in the state. The centerpiece of his plan was the refurbished rail diesel car we sat in. Manufactured by the Budd Company of Philadelphia and used throughout New England in the middle of the 20th century, rail diesel cars, or “Budd cars” remain remarkably nimble. They run without a locomotive, require half the crew and burn far less fuel than conventional passenger trains. As Blittersdorf sees it, they offer a practical, affordable way to make rail service viable in Vermont.

Six of his twelve Budd cars sat gleaming beside us in the Barre rail yard. His company, AllEarth Rail, acquired a dozen from a Dallas transit company last year for $4 million—far cheaper than the $189 million an Agency of Transportation study estimated it would cost to buy trains for a hypothetical St. Albans to Montpelier commuter line.

Blittersdorf’s lighter, quicker, cheaper rail solution takes advantage of what already exists and builds on it incrementally. In its earliest stage, trains will run along existing commuter corridors and where track is already in good shape—St. Albans-Essex Jct.-Montpelier Jct., Burlington-Middlebury-Rutland—in order to build success. It would then expand to other communities, investing in track infrastructure, and building ridership along less-traveled routes. The path forward for All Earth Rail may prove as bumpy as some of the decrepit tracks it hopes to use. Negotiating with the freight companies that own Vermont’s railroads is notoriously difficult. Several stations and proposed stops are not functional for rail passengers. The railroad between Burlington and Essex Jct.—a key link in the planned system—currently handles only slow-moving freight trains and will need substantial upgrades.

Vermont once depended heavily on trains to move people and goods across the state. The urban form that makes our downtowns and villages so appealing—multi-story buildings along compact, walkable streets—emerged from a need to access this once vital form of transportation.

So it wasn’t surprising to hear Blittersdorf’s talking point—80% of us live within walking distance of a railroad. That may be the most exciting possibility offered by his plan. A viable commuter rail system would create value in the places Vermonters have consistently said they care about—historic downtowns—while recreating the development conditions that generate the urban form they also say they love. It offers low carbon transportation to people living in walkable places, while creating an added incentive to locate homes and businesses in compact clusters around train stops. It would stimulate a virtuous cycle of public transportation and density that feeds economic development and discourages sprawl.

Commuter rail in Vermont? Until the Budd cars arrived, it seemed impossible. We’re not big enough. We lack the resources to build this most capital-intensive mode of transportation and the people to fill the trains. Yet here seems to be another way for us to integrate rail travel into the everyday life of Vermonters in a way that matters—one that reuses existing materials, exploits opportunities, employs agile technology, and taps into community and environmental values. The rail system that Vermont built in the 1800s has receded from our imaginations. It’s rusty and broken in places, but it’s still there and we seem to really need it. Getting Budd cars on Vermont rails is a formidable challenge. But taking an old thing, fixing it up and using it to solve a new problem—that’s what we’re good at.

Julie Campoli is the former editor of the STVT blog, an urban designer, land planner and author who writes about urban form and the changing landscape. Her books include Made for Walking and Visualizing Density. Through her practice, Terra Firma Design she helps communities and organizations plan for the future.