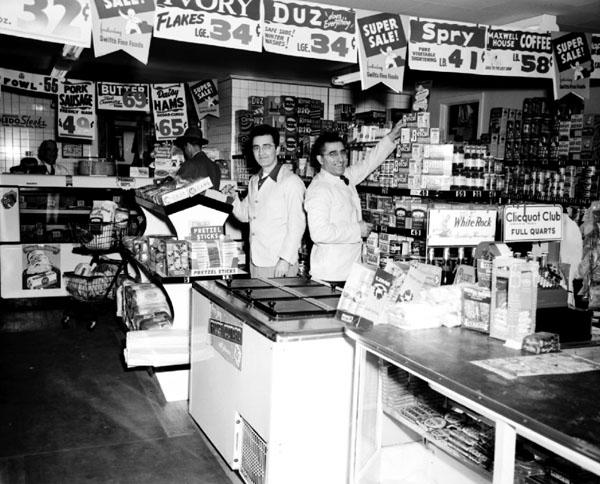 This summer we’ve featured several stories from people who have embraced a car-light lifestyle. They’ve used buses, bikes and a combination of alternatives to reduce their driving. But as anyone who has tried to get around without a car knows, proximity makes everything easier. Bus trips are simpler, bike rides are shorter, and car share rentals are cheaper when the places you need to go are located near your home. Which is why a sustainable transportation system relies on neighborhoods that contain more than just houses.

What can you buy within a 10-minute walk or bike ride of your home? If you’re lucky, there’s a store down the street. And if you’re very lucky, that store stocks real food and useful items like bread, apples, carrots, dish soap, and toilet paper. Until late in the 20th century, residents of most Vermont villages could find many of life’s necessities on the nearest street corner. Look closely at the details of older buildings in the neighborhoods of towns like Barre, Rutland, or Bennington and you’ll likely find the remnants of long-gone neighborhood stores.

This is certainly true in Burlington, where display windows and corner entrances, designed to engage and welcome potential shoppers are still visible. Throughout the city, groceries, hardware stores, creameries and other businesses sprouted on the ground floors of houses on streets where high foot traffic created a steady market for small scale retail. Many stores could be found in the city’s Old North End, a densely populated home to generations of immigrants. Selling goods and services to one’s neighbors through a home-based business offered one pathway to prosperity for recent arrivals.

In 1948, 85 food stores were located in an area of roughly 5 square miles. But as the century unfolded, the market for small retail tapered off in Burlington, as in most other U.S. cities and towns. Groceries and other stores consolidated and followed their customers to the suburbs. Essentials like meat, dairy, produce and staples disappeared as beer, soda, candy, and chips appeared on the shelves of local gas stations. As the market for retail space receded, store owners sold to landlords and homeowners, transferring many of those early storefronts to residential use.

Grocery locations between 1898 and 1986 from Julie Campoli on Vimeo.

Retail has changed profoundly in the last 50 years. In Burlington, some of the small stores had vanished by the end of the Depression, others grew into IGAs (Independent Grocers’ Association) and persisted until they were put out of business or bought by regional chains like A&P (Atlantic and Pacific Tea Company) and later Grand Union, which eventually fell to Price Chopper, Hannaford’s and other more recent superstores. Each consolidation placed groceries and everyday supplies a step further away from the old neighborhood. By 1986, 25 neighborhood groceries remained, and now, nine corner stores serve a developed area three times its 1948 size.

In an era when the butcher and the baker are as rare as the candlestick maker, the remaining corner stores may seem like a quaint echo of history. A few of the older stores remain in the Old North End.

But recent waves of immigrants have breathed life into the district’s commercial street, offering an eclectic array of goods like halal meats, curry pastes, banh mi, queso fresco, and ginger beer in small locally-owned stores.  These small businesses offer familiar staples and other everyday items to recent arrivals who, like earlier residents, live close together and don’t own cars.

Large chains offer greater efficiencies and lower prices, which is why residents of urban neighborhoods go out of their way to shop in them. But if the full service supermarkets are out by the interstate, requiring people to go an inconvenient distance, it helps to have plenty of mom and pop stores scattered throughout the neighborhood.  Retail diversity makes life easier for people who don’t have a car, or don’t want to drive.  Land use regulations should not only allow, but encourage this type of small scale neighborhood retail. Walkable, sustainable, and vibrant cities have neighborhoods where groceries and household items are as common as chips and soda.

Julie Campoli is the former editor of the STVT blog, an urban designer, land planner and author who writes about urban form and the changing landscape. Her books include Made for Walking and Visualizing Density. Through her practice, Terra Firma Design she helps communities and organizations plan for the future. An earlier version of this essay was published in in 2014 on Julie’s blog, before appearing on STVT.