Home » People, Places, and Transportation » A Foreign Land: A Trip to Montreal with Local Motion 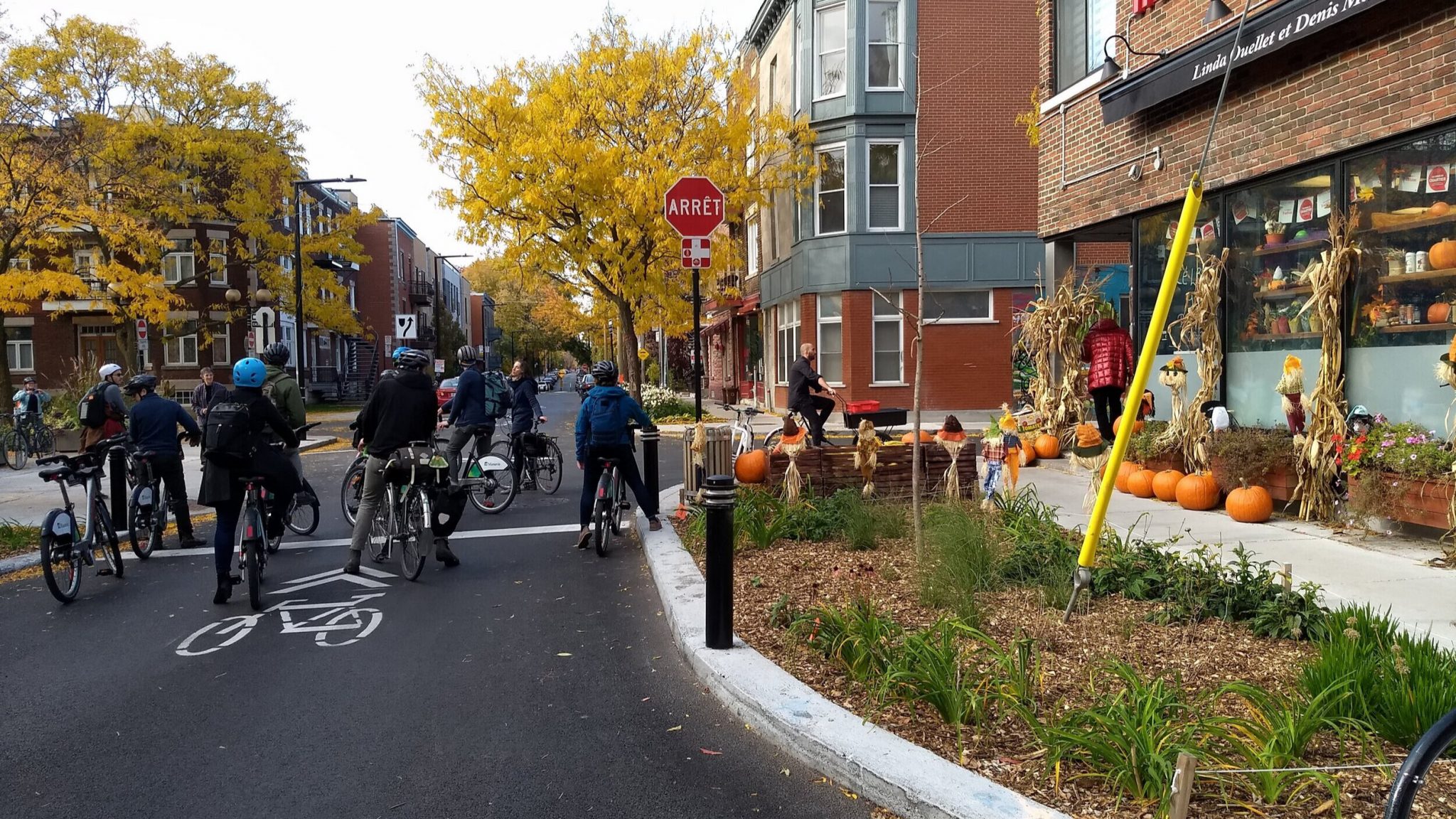 It had been at least 15 years since I took a trip to Montreal. I remembered seeing what seemed at the time like innovative bike infrastructure. But when I returned last month with other Vermont officials on a field trip hosted by Local Motion, I found much more than a few bike lanes. I found a city committed to improving conditions for people who choose to bicycle, along with a matter-of-fact attitude about surmounting obstacles that might stand in the way. Our guide, City Councilor Marianne Giguère showed us the many improvements to Montreal’s streets, but more importantly, she shared some of the thinking that had gone into various decisions and a taste of some of the debates around those changes.

The morning began with presentations on Montreal’s impressive snow removal practices that include the clearing of streets, sidewalks and bike lanes in a coordinated fashion. This presentation set the tone for many of the things we would see during the afternoon bike tour. The City was serious about change and determined to make it happen.

We learned that Montreal plans to build a 110-mile bicycling network within 10 years. Furthermore, they have a goal of 15% of all trips being made by bicycle in that time frame, which would put it at the top of North American cities. Every piece of infrastructure it adds builds towards that goal.

While not everyone in Montreal bikes, many see the benefits, including a City councilor we heard from, who extolled the virtues of getting more people to bike because it would mean less congestion and easier parking for him.

During the tour, we stopped regularly to hear from Marianne about how specific streets had been altered to make room for bikes by removing travel lanes, parking or sometimes both. Having been involved in several road diet projects in Vermont, I am familiar with how difficult it can be to make these changes, even if all the facts indicate they will work. Marianne stopped to show off one street that had been closed to traffic and now boasted a community marketplace and art installations. With a matter of fact tone she told us how the City had decided that “this street wasn’t necessary for car traffic.” Plans were in the works to make the closure permanent in the coming year and residents were wholly supportive of the change.

As the manager of the pedestrian and bicycling program at the Agency of Transportation, I was looking for different takeaways than my companions, Burlington City Councilors and staff. What could I bring back from Montreal that could be applied at the state level? I worked on mentally scaling down what we were seeing in a city with over 2 million people, to our state of 600,000 with its small towns and villages. Fortunately, a lot of what I saw in Montreal is transferable.

One has to do with managing change. Montreal made some initial small steps that led to an increase in bicycling. As more people started to see bicycling as a safe, convenient alternative, they sought better access to more places. The City’s position is that bicycling helps mitigate climate change, promotes economic development and provides a high quality of life for its citizens. It also offers residents a transportation option that reduces traffic congestion. But it takes leadership and bold decision making to start making the changes that will lead to transformation. Early successes build momentum, which spurs more change, but it doesn’t happen without controversy.

Another key takeaway was that all modes of transportation are given equal consideration in the way streets are designed and maintained. We toured several residential streets that featured on-street parking on both sides, curb extensions/bulb-outs at intersections and diagonal diverters at some intersections. The effect was to slow speeds and create vehicular chicanes. The result was very little traffic, a calm environment for residents, and a quiet, direct route for bicyclists. Although these streets didn’t have bike lanes, they were super pleasant to ride on.

Another important lesson I learned in Montreal is the value of protected bike lanes on busier streets. During the tour, we rode the gamut of bicycle facilities—from shared roadways, marked bike lanes (paint only) to completely separated bike lanes. Some were protected from moving traffic by parked cars or a concrete barrier, and were wide enough for bike travel in opposite directions. Many studies have shown that a large segment of potential riders require this level of protection in order to feel safe on a bike. Even an experienced road warrior like me felt a much higher level of comfort when riding on separated lanes. Protected lanes present winter maintenance challenges, but snowy Montreal has found workarounds, like the wider, two-directional lanes that can be plowed with a standard pickup truck.

The bike tour ended back at City Hall, leaving me awestruck by what Montreal had managed to do in the last 15 years. It’s in another country. The french signs and language makes that clear. But on that day, I really felt like I had traveled to a foreign land—a place that has truly embraced what it means to be multi-modal. Most people visit Montreal for the cultural experience. Now, part of that experience will be getting around the city, safely, year-round on bicycles.

Like our tour guides in Montreal, we can be bold leaders in our own communities. Bicycling in Vermont should not be such a foreign concept.

Jon Kaplan has been the Bicycle and Pedestrian Program Manager at VTrans since 2009 and has worked in the program since 2000. His responsibilities include funding and development, policy, technical assistance, safety education, and promotion of bicycling and walking. He has been involved with bicycle and pedestrian planning and design since 1993. This entry originally appeared here.