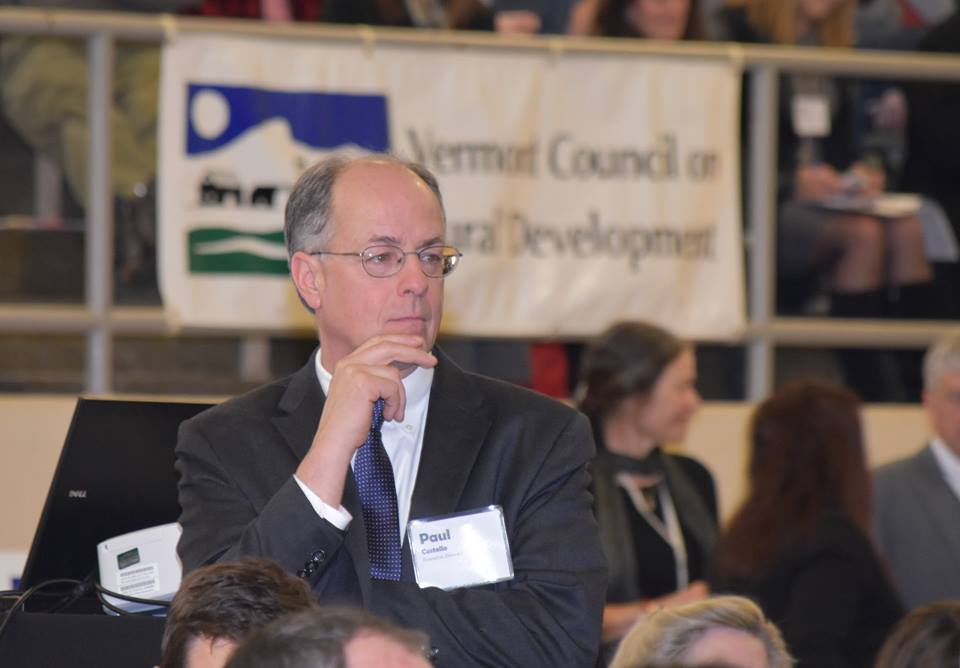 Paul Costello, Executive Director of the Vermont Council on Rural Development (VCRD), is a dynamic leader and powerful advocate who helps Vermont communities create prosperous and sustainable futures. He has promoted economic vitality and stewardship of Vermont’s natural assets in all corners of the state, and is a leader on climate change, having begun an initiative at VCRD to make Vermont a national hub for climate economy development.

He has committed himself to working across Vermont to make the state, and the individual communities that comprise it, a better place. I am really pleased to recognize him for that work.

The Arthur Gibb Award was co-presented to Costello by Megan Camp, Vice President and Program Director of Shelburne Farms, who is the current Chair of VCRD’s Board and a former VNRC Board member.

Costello, a lifelong Vermonter, grew up in Burlington and obtained a BA from the University of Vermont. He worked in human services, as a manager for the Middlebury Natural Foods Cooperative, and as a carpenter before beginning doctorate course work in intellectual history at McGill University, while lecturing at Saint Michael’s College, UVM, and McGill. After earning his PhD, Costello worked for five years at Central Vermont Adult Basic Education (CVABE), an organization that provides literacy instruction for adults and teens in Washington, Lamoille, and Orange counties, serving first as a regional coordinator and then as development director. He took the helm of VCRD in 2000.

Nathaniel Hausman, Project Director for the Clean Energy States Alliance, wrote in his nomination of Costello: “Paul understands the imperative of preserving Vermont’s land and traditions while at the same time promoting innovation and economic development.”

Sarah Waring, Executive Director of the Center for Agricultural Economy, endorsed Costello’s collaborative, people-centered approach to community problem solving. “Paul has dedicated his adult life to finding ways to protect the civic engagement in Vermont, and he’s done it by building bridges with advocates on both sides of the aisle, and perhaps more importantly, with supporters on Main Street and in the sugar house,” she said. “Paul’s strategy to create leadership teams, local facilitators, and networks of accountability enables self-actualization in our Vermont communities.”