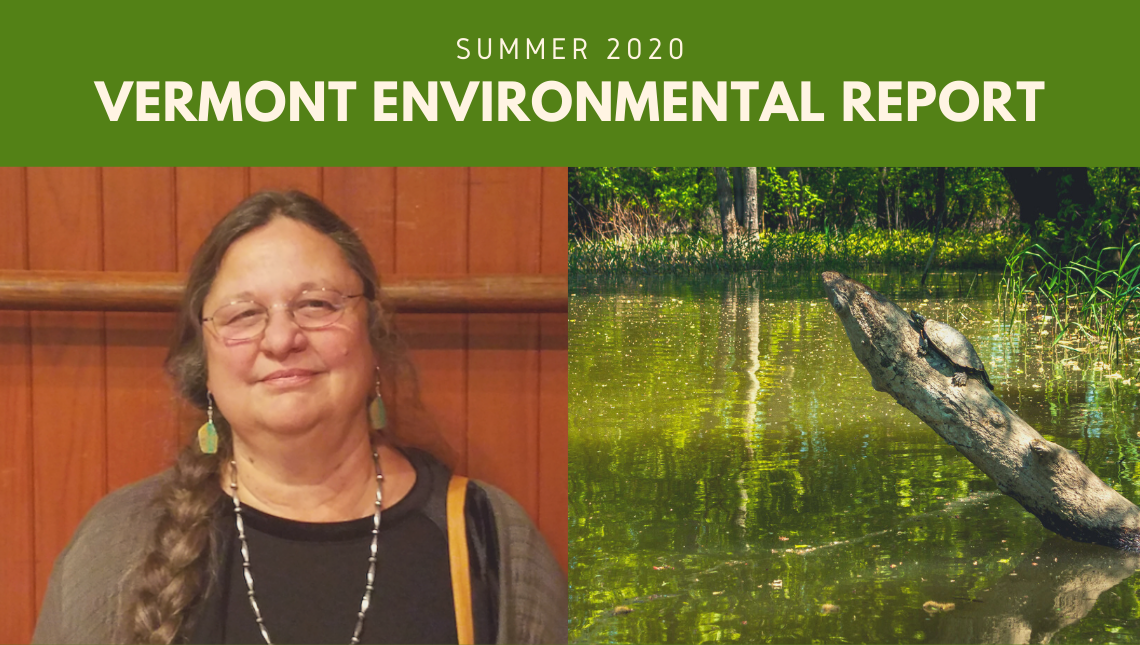 Judy Dow is an educator who serves as the director of Gedakina, a non-profit multigenerational endeavor to strengthen and revitalize the cultural knowledge and identity of Native American youth and families from across New England. She is also a VNRC Board member. As of writing, Gedakina has provided rapid response funding to 48 Native families in New England to help them pay for food, heat, fishing poles, and seeds during the health crisis. Learn more at www.Gedakina.org.

Judy Dow has lived her whole life in N’dakinna, currently called Vermont. While she was growing up, her family spent seven months in South Hero and five months in Burlington. Dow learned to observe the place where Lake Champlain narrowed between two islands, which she calls the narrows. That’s where she’d watch the currents changing, the winds switching directions, and the seagulls shifting their flying patterns with the seasons. If you knew how to read the narrows, you’d know where fish were spawning and when it was the right time to go fishing. The narrows made transitions visible.

Dow no longer lives on South Hero, but the narrows are still in her mind. She sees them as a metaphor for the advancing climate crisis and the monumental changes it will bring, exacerbated by the COVID-19 pandemic. We are going through the narrows now, she says, into a world that will be totally foreign to us. How can we prepare?

A lifelong educator, Dow often asks children what they will bring through the narrows when the time comes. There’s one ground rule: All systems they currently know and understand will be broken. There will be no WiFi, no electricity, and no fossil fuels. It can’t even be assumed that clean air and water will be waiting on the other side.

After repeated attempts to preserve their current way of life in an imagined future, Dow’s pupils eventually stop insisting that their candy and computers are essential. They opt instead for basic needs: clean air and water, seeds to grow food. They say they’ll take teachings, tradition, and family with them.

“These are the things that will get us through the narrows,” Dow explains. She believes that the rich might buy what they need to rebuild what has been destroyed, but money alone will not ensure long-term survival. “Those who survive in the long run will be people with the skills to understand the difference between a want and a need.”

Climate change has been a long-looming threat, and COVID19 an unprecedented, more sudden one. But from Dow’s perspective drawing from the traditions she grew up with, neither of these crises are fully unexpected, in terms of the destruction they are poised to bring. She refers to the Seven Fires prophecies, a spiritual teaching shared among many Indigenous people living in what is now called North America.

According to Dow, the prophecies predict a fork in the road where people can decide to travel down a burnt path of destruction or a green, lush path of health and harmony with all peoples. “We’ve always known that this fork in the road would be coming and we’d have to make a decision on which way to go. Going through the narrows is deciding the ultimate path,” she says.

To Dow, one of the most devastating parts of the COVID-19 pandemic has been its decimation of the elderly. In addition to their vulnerability to contracting and dying from the virus, older individuals have been overlooked or under-prioritized by virtue of their advanced age when medical professionals are forced to make decisions about who to treat, due to the limited resources available to them.

And yet, in Native communities, Elders are the people who might hold the ancient traditional ecological knowledge needed to cross through the narrows. They can be the last surviving speakers of a language. They know how to cultivate resilience and make use of ancient food systems, and how to use plants to create medicine. This includes species that many modern conservationists consider to be invasive — even if they have been in the land for many decades and their surrounding ecosystems have adapted.

Dow remembers her grandfather “just knowing” how to fish in Lake Champlain. He knew that the night crawlers he used as bait were not native to the land around him, and yet the fish and the people had adapted to them during generations of coexistence. She conjectures that many plants considered invasive today might actually hold the cure to new illnesses or threats. (Japanese Knotweed, for instance, has been used as a treatment for Lyme Disease.) Instead of strategically destroying an invasive, Dow says, we might consider waiting patiently for it to find its balance on the land.

Dow encourages us to think about who in our conservation and scientific communities are given authority to make decisions about which plants, fish, or animals are considered “invasive” and which are not, which lends itself to a larger question about the dominant power structures that undergird the work we all do on behalf of the environment and its people.

One thing is certain: When we talk about climate change and protecting the environment, we must center public health and equity. There is no hope to save our natural world without working together and supporting people who have been taken from and left behind. This includes Black, Indigenous and People of Color (BIPOC) communities who have been disproportionately exposed to toxic pollution, and any people struggling with poverty and other disadvantages.

One comment on “Judy Dow: Going Through the Narrows”