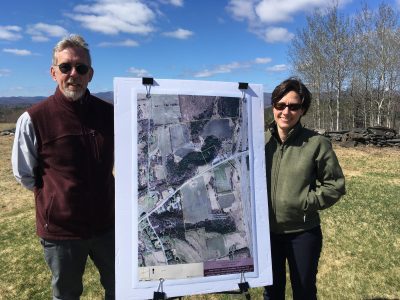 Last week, VNRC’s Brian Shupe and Kate McCarthy stood alongside conservation partners, the potential developer, and the farmer who will eventually farm that land to announce the planned conservation of over 171 acres surrounding Exit 4 in Randolph.  The conservation of the land came after the landowner withdrew an application to develop the site with over 1,000,000 square feet of commercial, industrial and residential development. That proposal was actively opposed by VNRC in partnership with Conservation Law Foundation and Preservation Trust of Vermont.

Developer Jesse “Sam” Sammis had proposed a 1.1 million square foot mixed-use development for the prime agricultural land near I-89’s Exit 4. Much of that land, 149 acres, will now be sold to a private non-profit dedicated to preserving Vermont farmland. The non-profit will then conserve the land and sell it to a farmer. The deal not only preserves valuable farmland, but also speaks to open space and scenic values, in addition to Vermont’s public policy of preventing sprawl and concentrating downtown centers.

The Preservation Trust of Vermont will have the opportunity to purchase the remaining 22 acres. The group, in conjunction with VNRC, Conservation Law Foundation, and the citizen group Exit 4 Open Space will need to raise $1,000,000 – well below the appraised value of the property – by June 15th, 2017 to complete the deal. We have started the fundraising for this steep goal, but need your assistance. Please make a donation here to help us, and Vermont, achieve this conservation goal.