Home » News & Stories » Coming Down from the Hill Town 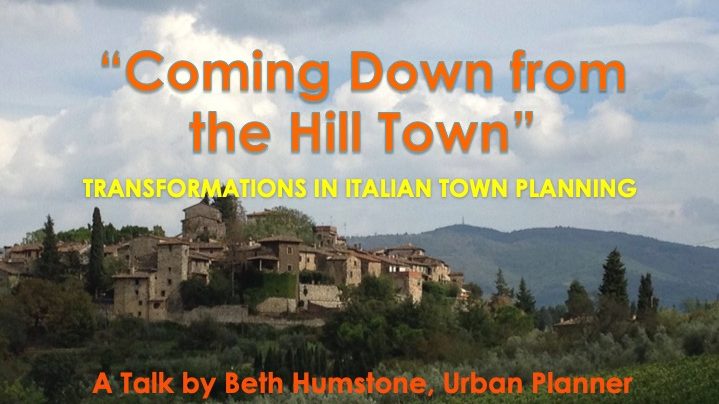 Last night we enjoyed “Coming Down from the Hill Town: Transformations in Italian Town Planning,” a talk by urban planner and former VNRC Board Chair Beth Humstone co-sponsored by VNRC and the Preservation Trust of Vermont. Humstone offered takeaways from her research in Italy for Vermont’s own rural towns to an audience of around 80 people at the Coach Barn at Shelburne Farms.

As a Fellow at the American Academy in Rome in 1985-86, Humstone studied the evolution of the form of small Italian towns from the early Roman period up to the present. In 2019 she returned to the Academy to pick up her research, this time with the benefit of computers, the Internet, translation software, digital mapping, and a much greater perspective on Vermont town planning, acquired during her career.

Through wonderful images and maps of a few key historic Italian towns, from the winding San Miniato to the pre-planned grid of Budrio, Humstone spoke of how these and other mountain villages evolved over the centuries. When we think of “sprawl,” shopping plazas and modern mansions come to mind. But there was sprawl in centuries-ago Italy, too: over time, merchants began moving outside the town center, and villas were built on large plots of land dotting the countryside.

The difference is that, as Humstone explained, Italian sprawl of yore came with a recognition that people depended on the countryside for their livelihood and needed to protect its floodplains, steep slopes, and forested areas: an ethos that persists to a large extent in Italian town planning today.

Humstone spoke of Act 250, state planning laws, and the Vermont Housing and Conservation Board (VHCB) as tools Vermont has to nurture our own towns and villages without compromising our vital countryside. But we still can’t “quite get it right,” she said. “With climate change, we need to rethink how we live and where we live.”

Thank you to everyone who attended! If you missed it, we have the talk on video. You can watch it here.