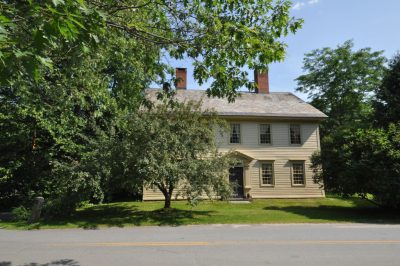 Today, the National Trust for Historic Preservation deemed the central Vermont towns of Royalton, Sharon, Strafford, and Tunbridge a “Watch Status Site” on its annual list of the most endangered historic places in America. (Find the official press release and list here.)

The decision comes on the heels of a Utah-based developer’s ongoing proposal to construct NewVistas, a planned community he envisions will attract tens of thousands of new residents to the four-town region of Vermont. So far, the developer has acquired over 1,500 acres in the area.

The Vermont Natural Resources Council, the Alliance for Vermont Communities, and the Preservation Trust of Vermont, along with a wide range of other local and state partners, continue working together to lead advocacy to stop the planned development, under expectation that the development would irreversibly disrupt the character of this rural Vermont area, historic and otherwise.

“The NewVistas development threatens to ruin the natural and historic features of this region that connect the people to the land and sustain the local economy: historic village centers, forestland, and farmland,” said Michael Sacca, President of the Alliance for Vermont Communities. “Today’s watchlist recognition is critical to raising public awareness across the state, region, and nation about how important it is to prevent NewVistas from coming to life, in order to sustain our efforts to conserve Vermont’s land and historic treasures.”

“The decision to place Royalton, Sharon, Strafford, and Tunbridge under watch status on a national list of endangered places eliminates any doubt that the NewVistas development proposal poses a significant threat, not only to these four small rural communities, but to the surrounding region as well,” said Brian Shupe, Executive Director of the Vermont Natural Resources Council.

“Having NewVistas recognized as a nationally significant challenge by the National Trust for Historic Preservation is an important step in helping the developer understand that his idea is a bad one for Vermont,” said Paul Bruhn, Executive Director of the Preservation Trust of Vermont. “I hope he is listening!”

The National Trust for Historic Preservation’s list of America’s 11 Most Endangered Historic Places is run annually to raise awareness of historic sites at risk from neglect, deterioration, lack of maintenance, insufficient funds, inappropriate development, or insensitive public policy. The list has been one of the most successful tools in the fight to save America’s irreplaceable architectural, cultural, and natural heritage. Learn more and view the list here: https://savingplaces.org/press-center/media-resources/announcing-2018-list-of-americas-11-most-endangered-historic-places#.WzIspy2ZOu5.