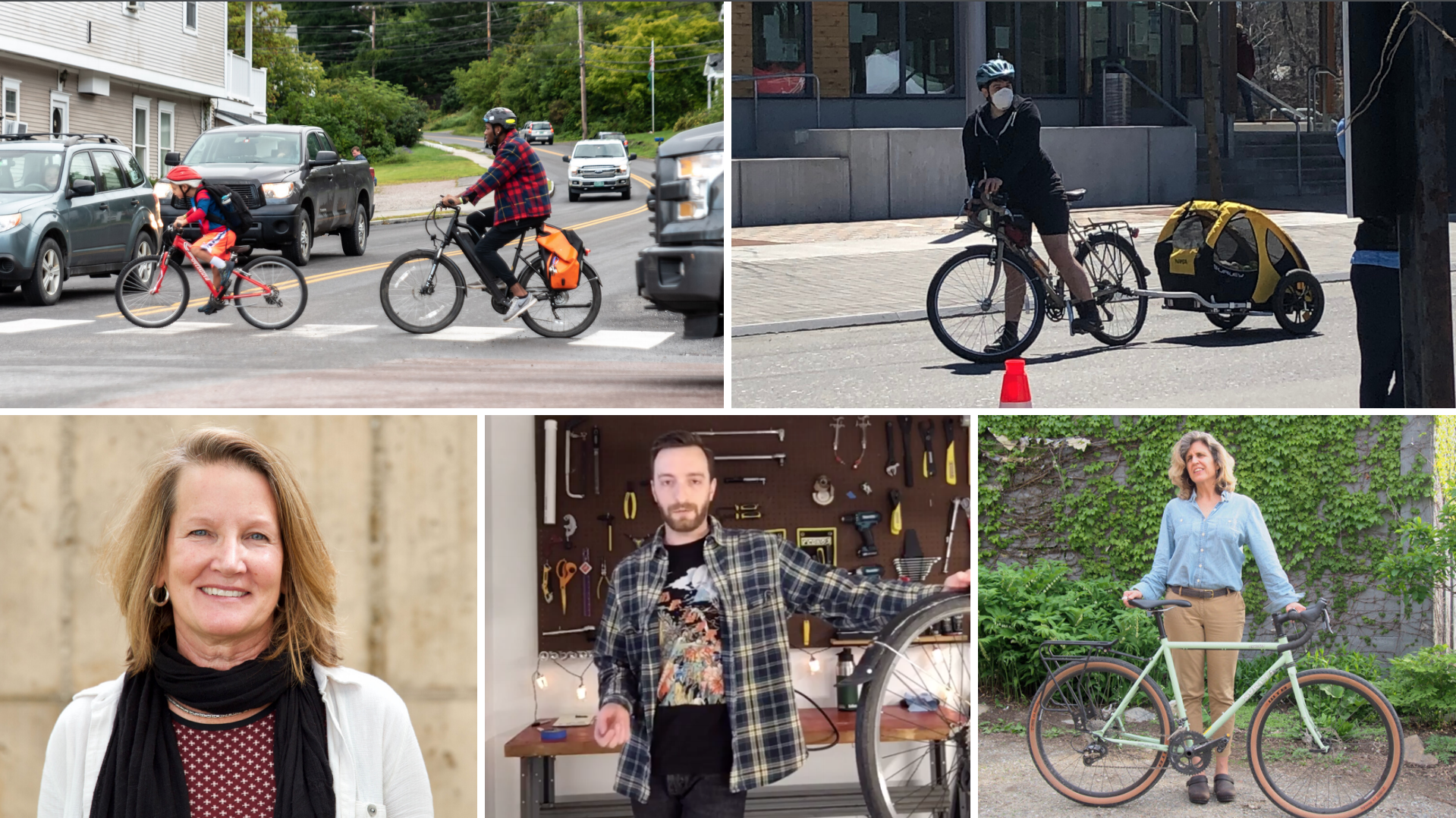 Have you been walking or biking more often, and driving less as a result of the COVID-19 pandemic? If so, you’ve probably found yourself taking up more of the road in order to maintain a safe distance from your neighbors, due to packed sidewalks and a decrease in car traffic.

In response to this emerging dynamic, transportation and safe streets advocate Local Motion — well known for its bike rentals on the Burlington Bike Path and its operation of the Island Line Bike Ferry — put together A Vermont Guide to Shared Streets during COVID-19. It provides ways towns can avoid problems caused by a central issue: “When traffic volumes decrease, speeds tend to increase. And when there are people on parts of the roadway where drivers don’t expect them to be, there’s an increased risk for crashes.”

These concerns are what drove the City of Burlington to launch its Shared Streets for Social Distancing campaign in April, prompted in part by crowding on the Burlington bike path.

Adjustments have included designating certain streets as available to local traffic only; designating others as “shared,” with reminders for motorists to drive carefully; and implementing temporary restrictions on others that widen key walking and biking corridors. You can see the changes mapped out here.

Vermont isn’t the only place modifying streets during the COVID-19 crisis. In April, the mayor of Oakland, California announced that under a program called Oakland Slow Streets, the Bay Area would close 74 miles of road (10% of its grid) to vehicle traffic for the duration of the pandemic to improve accessibility for pedestrians, bikers, wheelchair users, and others.

Similar changes have been implemented in Bogotá, Colombia, and Mexico City, both of which have painted miles of emergency bike lanes to provide essential workers with alternatives to packed public transit. This article in the Huffington Post gives a good rundown of these and other safe streets efforts around the globe. It suggests that we’re getting a “glimpse of a world where cars are no longer king.”

But can we sustain this vision? Karen Yacos, executive director of Local Motion, is encouraged by Burlington’s current street modifications. She knows firsthand that when people see physical changes in action and experience the benefits that result — for instance, fearing less for your family’s safety when a bike lane is added to your high-traffic street — they’re more likely to be in favor of implementing them on a lasting basis.

Enter Local Motion’s Pop-Up Project Mobile Support Unit, a 12-foot trailer filled with all of the supplies needed to run a successful pop-up demonstration project. Towns can rent the materials needed to install traffic calming measures, crosswalks, bike lanes, bump-outs, a pedestrian refuge, or a plaza. Guidance is included on what other towns have implemented. The Mobile Support Unit allows towns to set up safe streets experiments for a week or two and get a sense of how they would work full time.

VNRC is a big believer in the power of pop-ups. Our Fall 2019 Vermont Environmental Report spotlights Bethel, Vermont, which in 2016 implemented significant temporary changes to its Main Street over a weekend with various partners. They installed a multipurpose “blue” lane for bikes and other non-car vehicles; pedestrian bulbouts to improve street-crossing safety; and much more. The bulbouts at two crosswalks reduced traffic speeds from an average of 27 mph before the weekend to 15 mph during it, and measurably dropped the noise level.

Yacos believes Burlington’s temporary changes can inspire permanent improvements to the city’s streets. “All these changes people might have been opposed to; when they see them working, they realize they’re not as bad as they thought,” she says.

Meanwhile, Local Motion is busy engaging Vermonters around the use and care of their bicycles. Its school curriculum has gone online, and so has its mechanic and safety training courses. Jonathon Weber, the organization’s Livable Streets Program Manager, recently held a tune-up workshop via Facebook Live, broadcasting from his basement.

On April 16, Local Motion launched a petition calling for Governor Scott to ensure that bike shops be considered essential during the pandemic. (They could already perform repairs, but were unable to sell bikes, parts, and accessories, while auto parts stores had been designated essential). The next day, the State announced that bike shops, along with all retail businesses, could resume services and sales with curbside pickup.

Local Motion has kept its petition open and continues to advocate to Vermont’s Agency of Commerce and Community Development (ACCD) to designate bike shops as essential in case we return to a more restrictive order.

I asked Yacos how she thinks Local Motion’s work will change once the pandemic eases up. “I don’t think we’re going back to ‘normal,’” she told me. “I think we’re going somewhere else. Our goal is to determine how our programming can support new ways of thinking about transportation and community.”

Yacos thinks the COVID-19 crisis will cause many to imagine a Vermont where driving isn’t a daily necessity; where people can take public transit or feel empowered to get on their bike and commute to work. She thinks, too, that coming out of a socially-distanced climate where many simply crave being around others, we’ll demand a higher quality of life that includes a greater freedom of mobility.

For many, of course, better transportation infrastructure is not just a preferred option; it’s a necessity. Laura Jacoby is the executive director of Old Spokes Home. The nonprofit bike shop is located in the Old North End, a diverse and mixed-income Burlington neighborhood where many households rely on bicycles and public transport to get around.

Burlington’s “Shared Streets for Social Distancing” program currently includes streets in the Old North End (see map here). Still, Jacoby knows she can’t take for granted that any permanent safe streets modifications Burlington adopts in the core downtown area will extend to the Old North End or to other areas.

“Bike routes need to be accessible from all neighborhoods, and connect to places of work where our customers — many of them shift workers — are going,” she said.

Through its Everybody Bikes program, Old Spokes Home makes bikes and accessories affordable for income-eligible Vermonters who rely on the bikes to get to work and school. The organization also provides hundreds of children a year with bikes and helmets at no cost to their families, and is gearing up to offer an affordable e-bike program that makes bikes available at cost, financed with 0% interest.

With a Small Grant for Smart Growth from VNRC, Old Spokes Home is working on creating a Transportation Equity Coalition to ensure sustained representation of the carless in policy-making discussions about transportation infrastructure and services in and around Burlington. While social distancing has delayed in-person equity work, Old Spokes Home is currently pursuing a pilot mobility audit in the Old North End to better determine the community’s transportation needs and desires.

Local Motion, meanwhile, is thinking about ways it can improve Vermonters’ lives in the wake of the COVID-19 crisis. Says Yacos, “We may not be on the front lines of the response effort. But being able to get around on a bike and being able to walk in your communities is also important. Being healthy matters.”

Chronic lung disease, serious heart conditions, and diabetes are among the health factors that put people at higher risk of severe illness from coronavirus, according to the Centers for Disease Control (CDC). All of these are endemic in Vermont. Along with cancer, they make up three of the four diseases that result in more than 50% of deaths in the state, according to numbers from before the coronavirus even struck.

For many, pursuing a personal exercise routine can seem like a simplistic way to ward off vulnerability. The threats of environmental racism, a lack of affordable healthcare, and disparities in living conditions have compounded health problems among low-income communities and communities of color, who are suffering most from the COVID-19 crisis nationwide.

Still, the impulse to lead a healthier lifestyle resonates with many in these challenging times. Both Yacos and Jacoby have observed more people in their orbits who are citing their health and underlying health conditions as a reason to ride their bicycles and walk outside more often as part of an active lifestyle.

Moreover, we know that by encouraging more active transportation, we can improve our collective health in a significant way. A recent study by the Vermont Department of Health quantifies how meeting the transportation goals in Vermont’s Comprehensive Energy Plan by 2050 could yield dramatic health benefits, like saving 2,000 lives due to more physical activity, cleaner air, and safer roads.

Burlington’s Shared Streets for Social Distancing program is just a start, but it has the potential to catalyze big improvements in the Queen City, and ultimately across the state. Says Yacos: “People make change based on experiences. And this pandemic is a big change for everybody.”