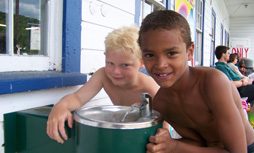 VNRC was part of a multi-stakeholder effort in 2019 to address the problem of lead contamination in Vermont schools, resulting in a law requiring testing for lead contamination in drinking water in all Vermont schools and childcare facilities. The law set a standard for acceptable lead levels (4 parts per billion) that was more protective than the federal EPA, and required remediation of any lead contamination found at or above that level. Importantly, the Legislature also allocated funding to ensure the initial testing and remediation happened quickly and consistently across the state. Lead sponsor and champion of the bill, Senator Brian Campion of Bennington, said: “It’s great to see the successful implementation of this law; no child should be drinking lead-contaminated water. The Vermont legislature must continue the work of ensuring safe drinking water for all Vermonters.”

According to an article in VTDigger published late last week:

“Almost all Vermont schools and child care programs have addressed lead in their drinking water systems thanks to a state program created and funded by a 2019 law, state officials announced this week. As a result, students’ exposure to lead has plummeted. Act 66 required schools and child care facilities to test drinking water systems for contamination, including all taps used for drinking or cooking. Schools had to replace fixtures or pipes to reduce lead levels when tests identified concentrations above the state’s “action level” of 4 parts per billion. According to a progress report released this month, 98% of schools have completed these replacements, prompting state officials to declare the program a success. As of February 2022, the majority of taps tested had lead concentrations of less than 1 part per billion. “