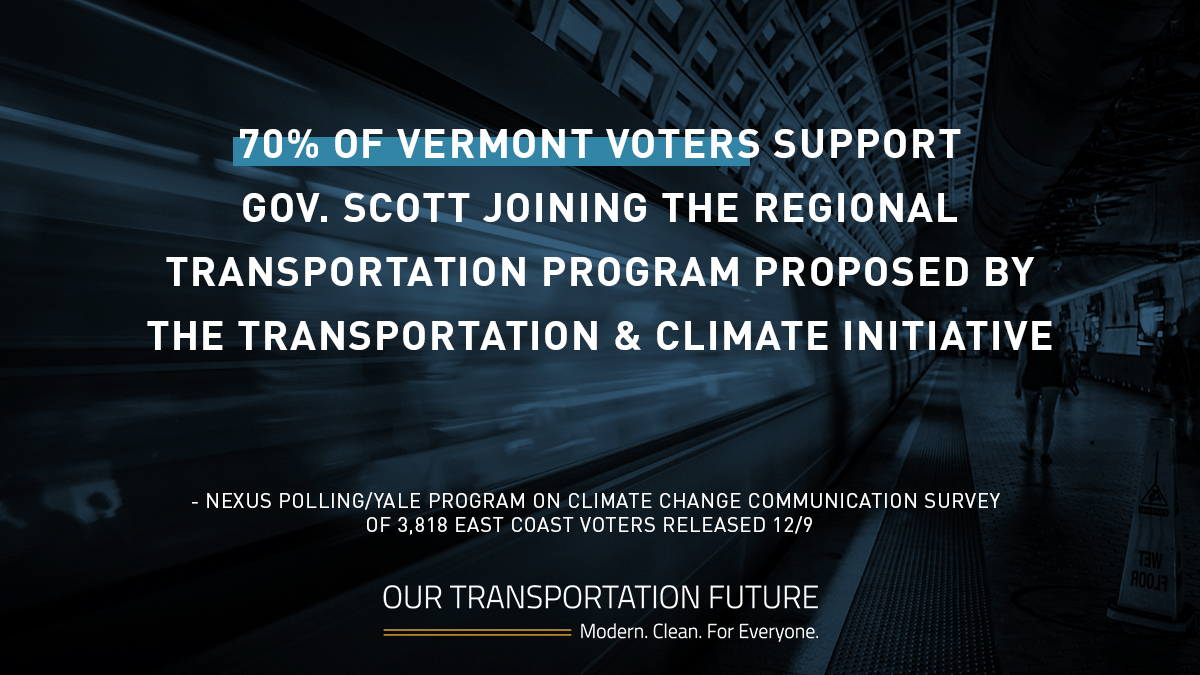 Support for the Transportation & Climate Initiative (TCI) is strong among Vermonters based on data from a new representative survey conducted by Climate Nexus and the Yale Program on Climate Change Communication (YPCCC) on behalf of the Our Transportation Future (OTF) coalition. The poll data was released this morning. Find the results here: https://www.ourtransportationfuture.org/tcipoll.

Eleven northeast and mid-Atlantic states and the District of Columbia are collaborating on TCI. Under this regional initiative, states would cap carbon pollution from the transportation sector and require fossil fuel companies to pay for the carbon pollution produced by the fuel they sell by purchasing annual allowances. The proceeds generated by this plan would then flow back to participating states to be reinvested in cleaner, more efficient, equitable and more accessible transportation options.

This is the culmination of almost a decade’s worth of work, led by state executive branches. For several years, the Scott Administration has worked closely alongside peers from other states in the design process to shape the program. Learn more about TCI here: https://www.transportationandclimate.org/content/about-us.

“There is a tremendous need to modernize and cut pollution in our transportation sector, doing so in an equitable way that works for all Vermonters no matter who you are, where you live or how much money you make,” said Johanna Miller, Energy and Climate Program Director at the Vermont Natural Resources Council (VNRC). “While the final program construct will remain unclear until the final MOU is released, it is clear that TCI could serve as a much-needed tool to cut transportation-related pollution and raise revenues to invest in cleaner, more affordable transportation solutions.”

The scientific survey includes a representative sample of more than 3,800 voters in the TCI region (Northeast and mid-Atlantic regions), including several hundred in Vermont. The poll was conducted by the Yale Program on Climate Change Communication and Nexus Polling on November 9th-15th following the national election and about a month ahead of the states’ final TCI Memorandum of Understanding (MOU) expected in mid-December.