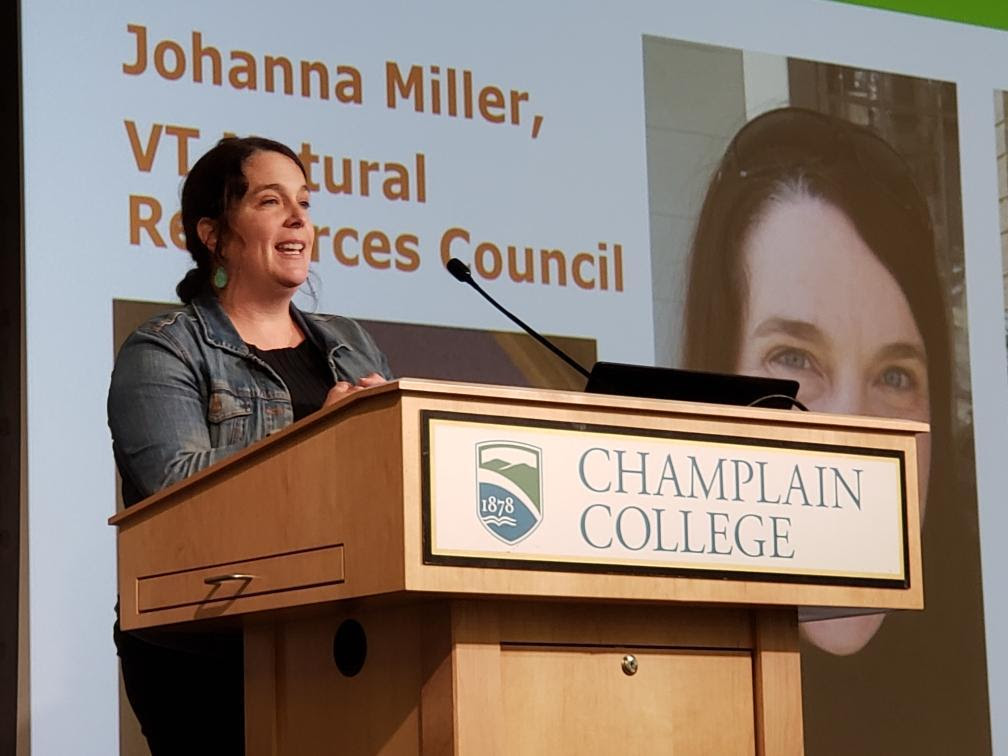 We’re happy to announce that the Energy Action Network (EAN) presented Johanna Miller, VNRC’s Energy and Climate Action Program Director, with this year’s Anne and Arthur Berndt Award at EAN’s annual conference today. The award recognizes EAN members who have demonstrated vision, leadership, and commitment to a renewable energy future for Vermont and who have shown dedication to the Network.

Congratulations, Johanna, on this well-deserved honor!

Darren Springer, General Manager of Burlington Electric and a Board member of VNRC, presented the award. Read on for what he had to say (we bolded the best parts).

For the past decade, I’ve had the privilege of working in the energy field in Vermont, first with Senator Sanders as his Energy & Environment advisor, then with Governor Shumlin, and now with Mayor Weinberger and the Burlington Electric Department/Burlington team. During that decade, there is no one I have observed who has been a more dedicated climate and clean energy advocate than our award winner today.

She has, despite the ups and downs of working on climate change and clean energy policies, always been an optimist, and never allowed any of us to get too low when things didn’t move in the direction we hoped or as quickly as we hoped.

At VNRC, she has steadfastly helped one of Vermont’s longest-tenured and best known environmental organizations become one of its most powerful advocates in fighting climate change, serving as the lead on energy and climate there.

Through that decade, she has built one of the most unique grassroots energy and climate organizations not only in Vermont, but in the nation, through the Vermont Energy & Climate Action Network, or VECAN. Organizing at the local level, engaging with Vermont’s town energy leaders, and developing new leaders to help us move forward. The VECAN annual meeting is now one of the preeminent energy conferences in Vermont and New England, drawing hundreds (on a Saturday! In December in Vermont!) to Fairlee every year. As an advocate at VNRC, she has helped advance myriad proposals, from net metering to the renewable energy standard to carbon pricing.

She has been a valued member of the EAN network during that decade as well, engaging on developing the 90 by 2050 goal, as part of EAN’s Vermont Energy Future Initiative and, most recently on the Summit Planning and Pitch selection committees. She is respected by all, serving on the Governor’s Climate Commission and participating in the VCRD Climate Economy Action Team.

As EAN and VNRC Board member I am so glad to provide this award to our winner today. For her many years of service to the environmental community at VNRC; for her work at the grassroots level; for her many years of passionate engagement in the work of EAN; and most importantly for her steadfast commitment to advancing energy efficiency, renewable energy, and greenhouse gas emission reduction policies in the state of Vermont, it is my honor on behalf of EAN to present the 2019 Arthur and Anne Berndt award to Johanna Miller!