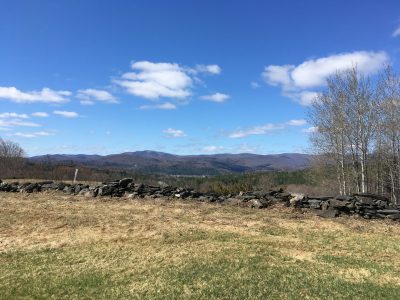 In May of 2015, Jesse “Sam” Sammis submitted an application to develop over a million square feet of office, residential, and industrial space on the prime farmland at Exit 4 in Randolph, Vermont. In addition to being some of the best agricultural soils in the state, this land is the gateway to Randolph and provides incredible views that are a point of pride for the community.

Now, nearly two years later, the Vermont Natural Resources Council (VNRC), Conservation Law Foundation (CLF), and the Preservation Trust of Vermont (PTV) have the opportunity to permanently conserve this land for farming, views, and the community. We need to raise $1 million by June 15th, 2017, or the owner may proceed with developing the land. In the last few weeks, we have already raised over $435,000. CLF, PTV, VNRC, and E4OS are working hard to raise the rest. We are asking for your help.

This opportunity came about after VNRC, CLF, PTV and E4OS banded together and intervened in the Act 250 permit process to fight this sprawling development. We were concerned about the agricultural soils, loss of an iconic scenic vista, and feared that a bad decision about how we use farmland could have a ripple effect through the state. After four hearings, the landowner withdrew his application, and approached us to discuss other options.

Thanks to the discussions with the landowner, and work by the Castanea Foundation, two conservation agreements mean that we have the opportunity to permanently protect all of the 172 acres of land:

Why does this land matter, and what will be the outcomes of conserving it?

The land at Exit 4 matters for reasons beyond the usual threats posted by gas stations, fast food restaurants, and other roadside development. At this site, approximately 134 of the 172 acres are considered primary agricultural soils – some of the state’s best soils for agriculture. Protection of these soils from development strengthens the local agricultural economy, and assures that these soils will be available over the long term for local food and feed production.

In addition, the view from the site is a beloved community resource for locals and visitors alike.

Once conserved, the agricultural soils will be owned and used by a farmer, and the amazing view will be preserved. In addition, by removing the threat of office and housing development at the interchange, conservation of this land will support Randolph’s downtown buildings and businesses.

Who benefits from the conservation of this land?

Farmers face fierce competition for good agricultural land in this area of Vermont, and those wishing to source their feed locally will benefit from the parcel remaining in production. Randolph residents will continue to enjoy a beautiful community gateway and their downtown businesses will not be compromised.. Visitors and locals alike stand to benefit from parts of the 22.5 acre parcel that may be made available as a simple picnic site for the public to access the land and enjoy the view.

The Castanea Foundation has reached an agreement with a local farmer to farm the 149 acres Castanea is conserving. It is possible that some of the acreage from the 22.5 acres – the parts that are best for farming – could also be conveyed to the farmer to expand the farmer’s production capacity..

Who will hold the conservation easement?

The conservation easement will be held by the PTV and will only allow the land to be used for growing crops or food by farmers, as well as limited, low-impact public uses such as a park with walking trails, a scenic overlook, and a small parking area where parking already exists.

How will the funding goals be reached?

This is a two-part effort. Citizens from E4OS are completely committed to seeing this through, and are working tirelessly on the grassroots campaign. As of May 19, 2017, E4OS has raised nearly $60,000. VNRC, PTV and CLF are collaborating on fundraising with major donors. To date, a total of more than $430,000 has been raised.

We hope you’ll consider a donation to help us meet our goal.

Conserving the remainging 22 acres of land at Exit 4 will help preserve this view and the long-term viability of important agricultural soils.