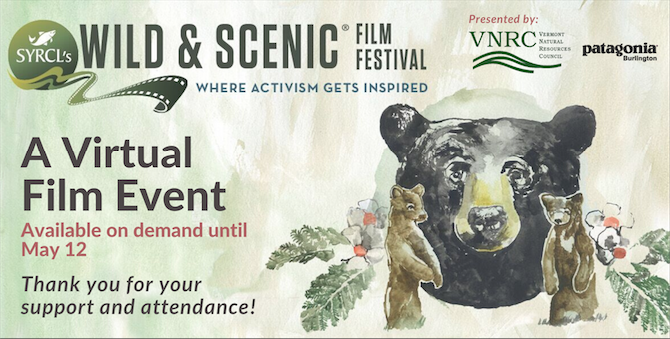 VNRC has co-hosted the Wild and Scenic Film Festival in Vermont for over a decade. This year’s screening was held virtually on May 7th and drew a crowd of over 500. The films will be available for on-demand viewing until May 12th.

This year, we were thrilled to offer an excellent line-up of short films that highlight the importance of equitable access to our open spaces and public lands. Find log-in information and summaries of the films below.

Having trouble signing up to view the films? Email Colin Keegan at ckeegan@vnrc.org.

Broken
Jon Wilson struggled with the emotions of feeling broken after losing his leg to cancer. Today, crutching up and skiing down mountains at night serves as a backdrop for him to explore, accept, and embrace the idea of ‘brokenness,’ leading to a more sincere, genuine and honest connection with life.

Detroit Hives
East Detroit urban beekeepers Tim Paule and Nicole Lindsey are a young couple working to bring diversity to the field of beekeeping and create opportunities for young Detroit natives to overcome adversity. Detroit ranks fourth in the United States for the most vacant housing lots with well over 90,000 empty lots to date. In an effort to address this issue, Detroit Hives has been purchasing vacant lots and converting them into buzzing bee farms. ‘Detroit Hives’ explores the importance of bringing diversity to beekeeping and rebuilding inner-city communities one hive at a time.

Feel of Vision
In 1997, Lonnie Bedwell lost his eyesight in a brutal hunting accident. Lonnie’s faith in most basic abilities was shaken and depression started to weigh heavy on his life. Eventually, Lonnie came across a kayak and fell in love with the challenge of white water. The rest is history as Lonnie set off for the west and became the first blind man to take on the 226 miles of the Colorado River.

GIANTS
In 2015, Everett Custom Homes purchased a property in Portland’s Eastmoreland Neighborhood. On the lot stood three giant sequoias, which the developer planned to cut down. ‘Giants’ details the efforts and challenges that neighbors of Eastmoreland confronted in their attempts to save these unique trees. The film brings a fresh look into local activism and highlights the importance of community organizing.

If You Can Hear My Voice
The Fight to Ban Chlorpyrifos: Claudia Angulo’s son was born with developmental delays after she was exposed to chlorpyrifos during her pregnancy. Now, she’s fighting for a ban on the pesticide. “If we want things to change, we have to work together,” Angulo says. “Don’t stay silent. Don’t just sit around at home. Stand up and make your voices heard.”

Nature Now
Made with no flights, recycled footage, and zero net carbon. Given away for free. Viewed 53 million times, played to the United Nations. This film is a personal and passionate call to arms from Greta Thunberg and George Monbiot to use nature to heal our broken climate.

Positive Forward Motion
Hiker and endurance athlete, Jennifer Pharr Davis, reflects on the challenges and lessons that life has brought her following her record-setting thru-hike on the Appalachian Trail. While spending time alone on the trail, Jen looks back over what she has learned and how she has grown through hiking, becoming a mother, and growing a business.

This Land
Runner and advocate Faith E. Briggs used to run through the streets of Brooklyn every morning. Now she’s running 150 miles through three National Monuments that lie in the thick of the controversy around United States public lands.

Where Life Begins
Along the Arctic Coast, at the northmost point on American soil, we explore the inseparable bond between mother and child, the sacred and fragile moments after birth, and the importance of protecting the place Where Life Begins.

With thanks to our local partners:

And to our National Sponsors: